This afternoon it was beautiful weather which we used to sail Røret from Hårbølle to Klintholmhavn. With a very smooth wind we prepared to try some cloth on the rigging of this lovely old postboat.

Some older red canvasses were loaded in the car and we took of. Before the outer buoy we set our Jib. A high aspect piece of canvas which was some 40cm to long. What to do? We used the second eyelet on the luf and dangled the top 40 cm down from the halyard. After enjoying this sail and making way with 1.4 knots we took an other sail and hanged it from the yardarm. It although it was a StaySail it became a flying sail.

In contrast to our expectation we did not drift. On our way their is a Cardinal buoy which we chose to have on our port side, it being a south cardinal.Every 30 seconds Stefan or me looked to check if we were not ended up on its north side. On the engine we had to give a little starboard ruther but now under sail with two pieces of canvas we were almost sailing against drift and current even more south and we hoped for.

Slightly disappointed in our speed we decided to set a direct course to Klintholm Harbour directly after taking down the sails. The fixed yardarm is a crime to work with and takes a lot of concentration of the man steering and the man taking down the sails. in fact when sailing you make a good choice on being 3 to operate the ship. Not the jib but the mainsail will be quite a handful. 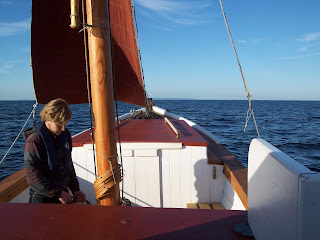 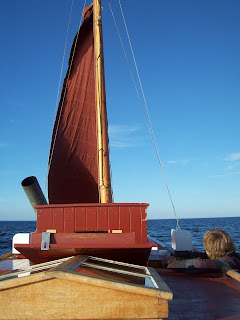 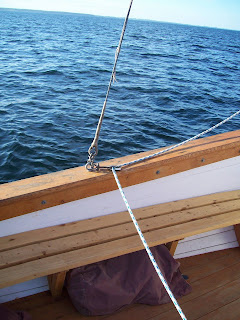 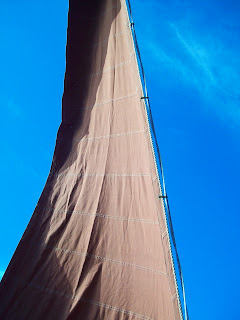 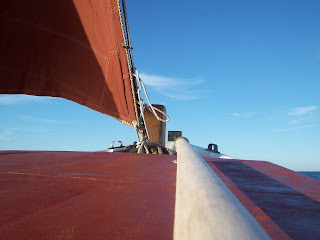 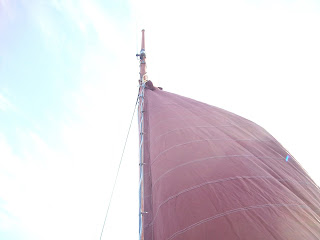 2012-06-01
After some strong winds we are almost reserving time for repairing sails. Genoa's are the most common with tears in the vicinity of the leech(achterlijk). Specially when the uv-protection is worn, tears in the Dacron will arise in heavy weather. Flapping of the sail under clearing away will start tears on the leech where it has had contact with spreaders and stays.
We almost always provide repairs overnight or even on the same day. 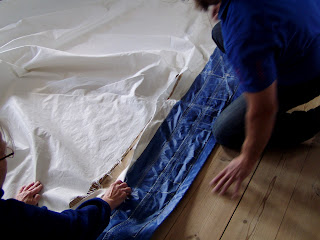 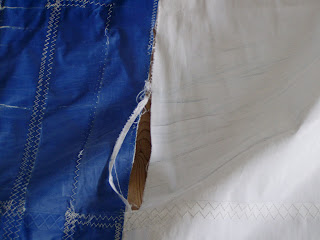 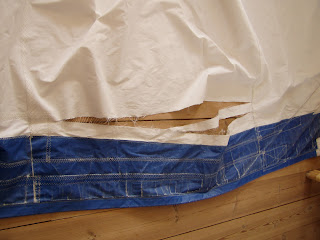 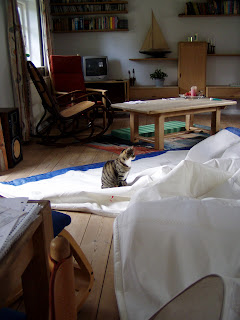 With Mortimer as supervisor all sails are repaired perfectly.

2012-05-04
We had our first konfirmation "party" with 36 guests.
Menu:
Starters: Puff Pastry with salmon and spinache
Mains: Indonesian Rice Menu with 8 different main dishes and all surrounding.
Dessert:.Ice

We had a very nice arrangement of the tables. 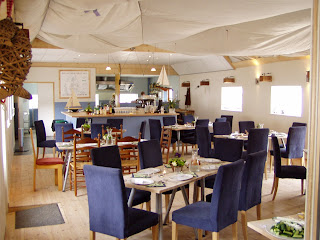 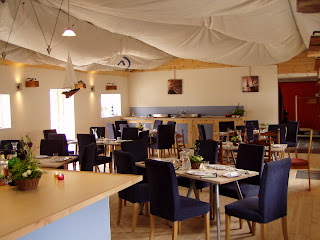